WOW: Trump Reacts To The Testimony – It Is About TIME 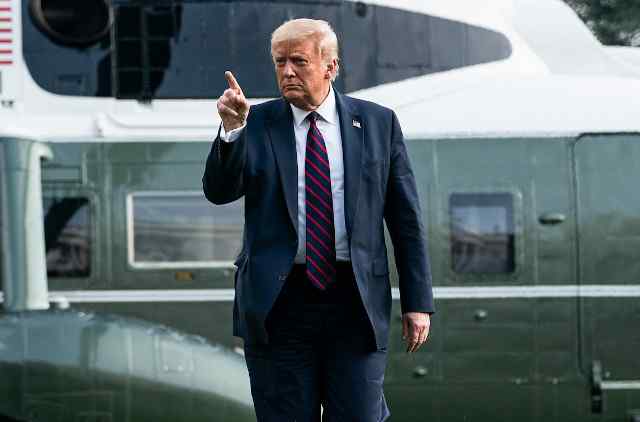 foxnews EXCLUSIVE: Former President Donald Trump reacted to the bombshell testimony out of the trial of Michael Sussmann that Hillary Clinton herself approved the dissemination of false information alleging a covert communications channel between the Trump Organization and a Russian bank to the media.

Trump told Fox News Digital that the entire Russia investigation is “one of the greatest political scandals in history,” and that he will “never” get his “reputation fully back.”

Former Clinton campaign manager Robby Mook on Friday testified as part of the first criminal trial out of Special Counsel John Durham’s years-long investigation into the origins of the Trump-Russia probe, saying Clinton approved and “agreed” to share the discredited data with the media.

Former FBI General Counsel James Baker testified Thursday that the bureau investigated the data alleging a Trump connection to the Kremlin-linked bank, and found that “there was nothing there.”

“This is one of the greatest political scandals in history,” Trump told Fox News Saturday morning. “For three years, I had to fight her off, and fight those crooked people off, and you’ll never get your reputation fully back.”

“Where do I get my reputation back?” Trump said again.

Trump said that the law enforcement and intelligence community resources devoted to investigating him and members of his 2016 campaign distracted officials from what “could have been a real danger with Russia.”

The FBI, in July 2016, opened a counterintelligence investigation into whether candidate Donald Trump and members of his campaign were colluding or coordinating with Russia to influence the 2016 campaign.

That FBI investigation, known as Crossfire Hurricane, was handed off to Special Counsel Robert Mueller after Trump was elected. Mueller was appointed on May 17, 2017.

After nearly two years, Mueller’s investigation yielded no evidence of criminal conspiracy or coordination between the Trump campaign and Russian officials during the 2016 presidential election.

Durham was tapped in 2019, shortly after Mueller announced his findings, by Attorney General Bill Barr to investigate the origins of the FBI’s original investigation into the Trump campaign, which led to the appointment of Mueller as special counsel.

Mook, during cross-examination by government prosecutor Andrew DeFillippis, was asked about the Clinton campaign’s understanding of the Alfa Bank allegations against Trump and whether they planned to release the data to the media.

Mook said he was first briefed about the Alfa Bank issue by campaign general counsel Marc Elias, who at the time was a partner at law firm Perkins Coie.

Mook testified that he was told that the data had come from “people that had expertise in this sort of matter.”

Mook said the campaign was not totally confident in the legitimacy of the data, but had hoped to give the information to a reporter who could further “run it down” to determine if it was “accurate” or “substantive.”

“I discussed it with Hillary as well,” Mook said.

“I don’t remember the substance of the conversation, but notionally, the discussion was, hey, we have this and we want to share it with a reporter,” Mook said.

The government asked Mook if Clinton approved “the dissemination” of the data to the media.

Mook later said he “can’t recall the exact sequence of events,” when asked if he shared the idea to give the Trump-Alfa Bank allegations to the media with Clinton before or after the decision was made.

“All I remember is that she agreed with the decision,” Mook testified.

Sussmann has been charged with making a false statement to the FBI when he told Baker in September 2016, less than two months before the presidential election, that he was not doing work “for any client” when he requested and attended a meeting in which he presented “purported data and ‘white papers’ that allegedly demonstrated a covert communicates channel” between the Trump Organization and Alfa Bank, which has ties to the Kremlin.

Sussmann has pleaded not guilty to the charge.

Mook, earlier in questioning from the defense, was asked whether he or anyone on the Clinton campaign approved or gave Sussmann permission to bring the allegations to the FBI, to which he said: “No.”

When asked again, he said: “I don’t know…I don’t know why she would.”

Meanwhile, Baker testified Thursday that the FBI began an investigation into the Trump-Alfa Bank allegations, which lasted “several weeks, maybe a month, maybe a month and a half.”

“We concluded there was no substance,” Baker testified. “We couldn’t confirm it. We could not confirm there was a surreptitious communications channel.”

Baker added: “There was nothing there.”

In testimony on Tuesday afternoon, FBI Special Agent Scott Hellman also said the data revealing the alleged covert communications channel between Trump and Russia that Sussmann brought to the FBI turned out to be untrue, and said he did not agree with the narrative.

Hellman testified that whoever drafted the narrative describing the DNS data was “5150,” and clarified on the stand that meant he believed the individual who came to the conclusions “was suffering from some mental disability.”

Mook’s testimony revealing Clinton approved the plan to share the Trump-Alfa Bank allegations with the media comes after Fox News first reported that the CIA, dating back to July 2016, had information of Clinton’s “approval of a plan” to tie Trump to Russia “as a means of distracting the public from her use of a private email server.”

Fox News obtained declassified notes from then-CIA Director John Brennan after briefing then-President Obama on July 28, 2016, memorializing Clinton’s purported “proposal from one of her foreign policy advisers to vilify Donald Trump by stirring up a scandal claiming interference by the Russian security service.”

“The following information is provided for the exclusive use of your bureau for background investigative action or lead purposes as appropriate,” the 2016 CIA memo to Comey and Strzok stated.

“Per FBI verbal request, CIA provides the below examples of information the CROSSFIRE HURRICANE fusion cell has gleaned to date,” the memo continued. “An exchange [REDACTED] discussing US presidential candidate Hillary Clinton’s approval of a plan concerning US presidential candidate Donald Trump and Russian hackers hampering US elections as a means of distracting the public from her use of a private email server.”

The memo was heavily redacted.

Fox News first reported that those materials were provided to the Justice Department by former Director of National Intelligence John Ratcliffe in 2020 to support Special Counsel John Durham’s investigation into the origins of the Trump-Russia probe.