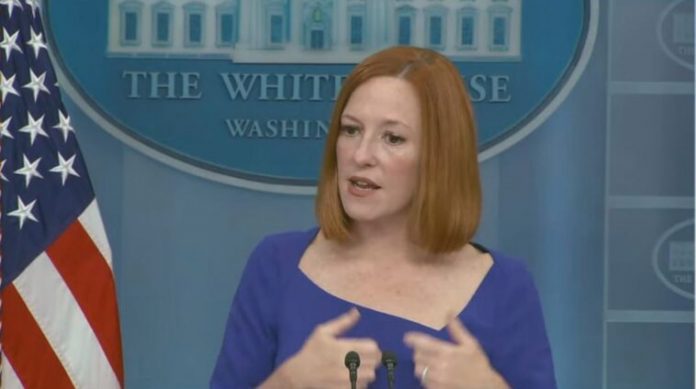 (trendingpolitics) – Jen Psaki is finally exiting her job at the White House. The news media’s praise for the departing White House Press Secretary is revealing. Watch:

On Friday, Psaki said her farewells to her purported adversaries in the Fifth Estate, whom she reportedly plans to join soon with a cushy gig at far-left media outlet MSNBC.

Nearly every reporter who spoke to Psaki had warm words for her regarding her time as Press Secretary. But in Psaki’s wake is a record of deceit and lies that would make even long-time media observers blush. Reporters should not be thanking people who have lied to their faces for over a year.

Karine Jean-Pierre is taking over Psaki’s role as White House Press Secretary in the Biden administration. Will the new Press Secretary be just as awful as Jen Psaki?* Yes, anyone under the Biden Admin is awful! No, she’ll be worse Email* This poll gives you free access to our premium politics newsletter. Unsubscribe at any time.

“Karine not only brings the experience, talent and integrity needed for this difficult job,” Biden said in a statement, “but she will continue to lead the way in communicating about the work of the Biden-Harris Administration on behalf of the American people.”

Jean-Pierre is known for her far-left views, such as the argument that America is irredeemably racist, sexist, bigoted and homophobic. This is what she had to say about Barack Obama getting elected:

When he got elected, I think people thought we were in a post-racial America and we were not. I think what we learned is that racism was very much real and still very much around and the obstruction that he saw, just the horrible racist rhetoric of having a Black family in the White House was very clear that you felt the hate and you saw the hate. I just think that America has a really big problem with race and it’s very real.

Six years after Obama left office, we now have a black, female, LGBTQ+ person with the biggest platform in the country. Instead of recognizing how far America has come and acknowledging her privilege, she continues to accuse everyone who disagrees with the hard left of being ‘racists.’

Let’s hope that Jean-Pierre is more honest than Jen Psaki was at her job. But knowing the radical left, the only thing you can count on with them is more lying.

Previous article
VIDEO: What This Biden Rep Just Admitted On Tape Will Have Moms UP IN ARMS
Next article
SHOCK VIDEO: Whoopi Goldberg FLIPS And Defends Trump