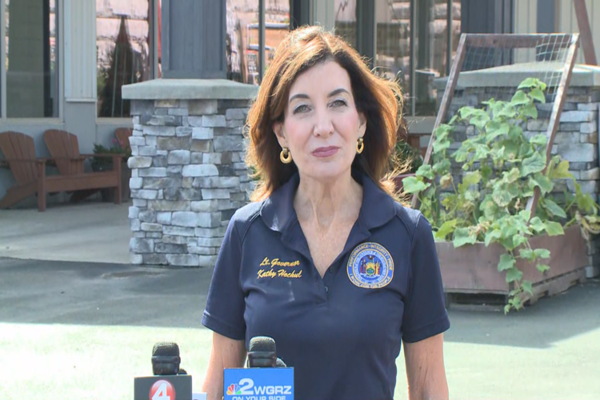 (breitbart) – New York Gov. Kathy Hochul (D) on Wednesday announced plans to create a police unit designed to, in part, combat “hate speech” in the wake of the tragic shooting in Buffalo, promising to “confront this epidemic head-on.”

“In wake of the racist act of terror in Buffalo, New York will lead the charge to confront this epidemic head-on,” she added:

“The unit will be responsible for developing investigative leads based on social media analyses focused on radical extremist activities motivated threats by identifying online locations and activities that facilitate radicalization and promote violent extremism,” it reads in part.

The issue, however, is the debate over what individuals consider “hate speech,” triggering fears of a slippery slope, given the fact that some radical leftist activists, for example, consider “misgendering” someone as a fundamentally hateful act.

“The horrific and despicable act of terror committed by a white supremacist this past weekend in Buffalo showed that we as a country are facing an intersection of two crises: the mainstreaming of hate speech — including white nationalism, racism and white supremacy — and the easy access to military-style weapons and magazines,” Hochul said in a statement.

“This is a wake-up call and here in New York we are taking strong steps to directly address this deadly threat,” she continued:

Today, I issued Executive Orders to devote substantial resources and focus toward combating the troubling surge in domestic terrorism by identifying radicalized individuals and tracking their threats amplified on social media, and further empower State Police to keep guns away from dangerous people. I am also issuing a referral letter to the Attorney General to investigate social media’s role in the Buffalo shooting, and am calling for the passage of several pieces of legislation that will help law enforcement get more guns off the street.

“We will continue to confront this epidemic head-on, stamp out extremists who threaten our communities, strengthen the toughest gun laws in the country and do whatever it takes to keep New Yorkers safe,” the Democrat governor added.

Speaking with Breitbart News Daily on Wednesday, Rep. Elise Stefanik (R-NY) called the Buffalo shooting “an act of pure evil” and blasted the establishment media, calling it “shameful that the media is taking this tragedy to try to score political points.”

“This was filth and heinous. … But the fact that now mainstream media is accusing Republicans who support border security and support and oppose amnesty for illegals as somehow leading to this. It’s outrageous, It’s disgraceful. It’s dangerous,” she said.

“The American people see through this and it’s a disgrace on the media and frankly, it’s disgraceful for the people of Buffalo to see the media take advantage politically of this horrific tragedy,” she said. “This criminal should be prosecuted to the fullest extent of the law and New York State should consider reinstating the death penalty.”