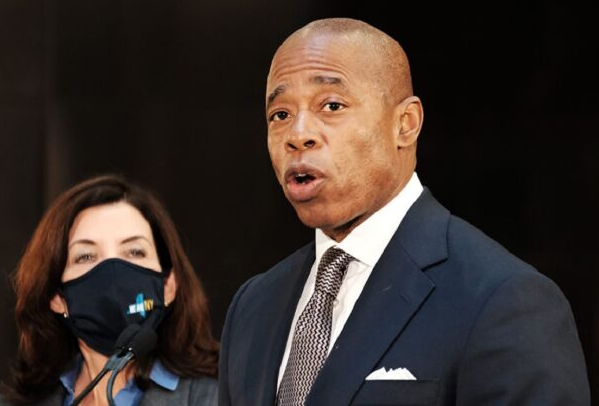 (trendingpolitics) – New York City inflated reports of “Covid hospitalizations” by over 100% in order to justify the city’s response measures, which were among the most draconian in the nation.

“State data shows that of the 670 patients marked as being infected with the virus on Friday, just over two in five — or 43.7 percent — were admitted because of the disease, with the rest coming to wards for another condition such as a broken leg, but later being found to be infected,” the Daily Mail reported.

“It suggests the majority of ‘Covid’ patients in U.S. hospitals are no longer people primarily ill with the disease,” the report added.

“The proportion of the city’s ‘Covid’ patients who are ill from the virus has risen slightly from last week, but it has remained well below half of all patients since the start of February,” the report noted.

The Covid hospitalization data is scientifically invalid because it fails the mutual exclusivity test. It misrepresents the data by cherry picking the category and presenting it without necessary additional context. Thus, it is “missing context” as the ‘fact checker’ racket would say.

The Covid data fraud is consistent with New York’s track record of deceiving the public about the severity of the disease, while implementing scientifically baseless policies such as Covid vaccine passports in New York City.

Disgraced former Governor Andrew Cuomo was shown by his own Attorney General Letitia James to have fudged the nursing home death numbers stemming from a March 2020 decree.

“The New York State attorney general accused the Cuomo administration of undercounting coronavirus-related deaths at nursing homes by as much as 50 percent,” the Times reported at the time.

Dr. Anthony Fauci in January of this year gave the ‘Covid hospitalization’ game away.

“If a child goes into the hospital, they automatically get tested for COVID and they get counted as a COVID-hospitalized individual, when, in fact, they may go in for a broken leg or appendicitis or something like that,” Dr. Anthony Fauci told MSNBC. “So it’s over counting the number of children who are, quote, hospitalized with COVID as opposed to because of COVID.”

New York City was earlier reported to have fudged its Covid hospitalizations, but the new report confirms that it is has not reformed its data reporting.

“New statistics show that more than 40 percent of the state’s hospitalized coronavirus-infected patients were admitted for ‘non-COVID reasons’ — with the ratio in New York City ‘about 50-50,’” the New York Post reported in January, citing Governor Kathy Hochul.

But as New York City enters a “high alert” stage amidst the less-deadly BA.2 Covid variant, Mayor Eric Adams is doing the right thing for a change: Nothing.

It remains to be seen if Adams’ masks-off policies will last, however, as New York’s residents are notoriously addicted to wearing masks, despite all of the data that show they do virtually nothing to slow the spread.

Previous article
SICK: Biden’s Crisis Has Now Led To Hospitalizations Of Children
Next article
WATCH: Joe Biden BREAKS DOWN in the Middle of His Speech